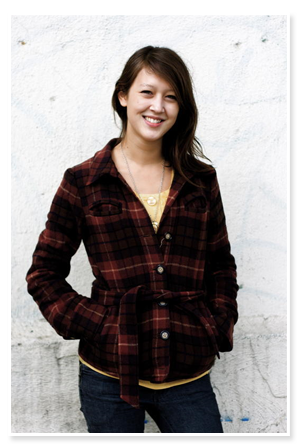 Born in New York and raised in New Jersey in a multicultural household, Cathy Erway is a lover of food of all kinds. An avid amateur cook, she decided to purge her diet from restaurant or take-out food and began blogging about it on Not Eating Out In New York in 2006. In between posting recipes for the busy-but-thrifty, she explored the underbelly of the city's home-cooking culture, visiting urban farms, foraging, trash-diving and hosting cook-offs and supper club dinners. In the end, she came away with a greater conscience about where food comes from, what it takes to produce it, and most importantly, how to have a great time cooking it with others.

Cathy writes about food, sustainable farming and green living at The Huffington Post, Saveur.com and Edible Brooklyn, and has written for Brooklyn Based and The L Magazine. She hosts the weekly radio show, Let's Eat In, on Heritage Radio Network on Mondays. She has organized or participated in several fundraisers for Just Food and Slow Food NYC, and co-founded the Hapa Kitchen supper club, which creates local and seasonal food inspired by its members' half-Asian heritage.