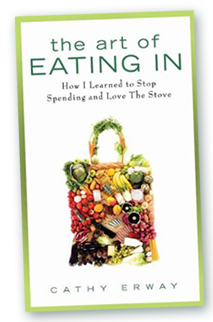 USA Today
Tired of what she considered subpar restaurant food at inflated prices, Cathy Erway decided to take a stand. Her memoir, about not eating out in New York City, where restaurant dining is a crucial part of the culture, deserves a toast. Her fearless approach to home cooking pays off with some revelatory results. Two tasty tidbits: Spicy tripe menudo soup really does help cure a hangover, and Dumpster diving isn't as disgusting as it seems. And while her (now ex-) boyfriend didn't appreciate her culinary evolution, she has a group of friends who do. Best of all, her recipes are accessible and affordable.

Kirkus Reviews
A New York City food blogger chronicles her time as a culinary shut-in. Erway had her epiphany while eating a greasy hamburger. Like many New Yorkers, she rarely cooked at home, instead indulging in the countless restaurants her adopted hometown offered. However, while New York is arguably the epicurean capital of the world, many of the eateries serve little more than expensive greasy hamburgers. Erway decided that both her stomach-and her wallet-needed a break. Her solution was to go on a complete restaurant fast and document the process-the discoveries, the recipes and the restrictions-on her blog, noteatingoutinny.com.

During the course of her two-year experiment, she cooked her way through three apartments, one relationship and an attempt at dating. She also spawned several award-winning dishes, immersed herself in New York's foodie underground and managed to cook tripe. Most remarkable, however, is not the fact that she made it that long without eating out-she often took premade food with her in case of emergencies. Rather, it's how appealing and simple the author makes it seem. She makes whipping up a batch of homemade basil ice cream seem as easy as microwave pizza. She turns foraging in New York parks into an adventure. And she makes every success, including her prize-winning no-knead bread recipe, into readers' victory as well, including recipes for her favorite dishes at the end of each chapter. All of this is presented in a light, girl-next-door manner; the author gleefully mixes and sautes through life, making you want to grab a spoon and help. Like a great dinner party, Erway's memoir is full of fabulous food and engaging conversation.

Publishers Weekly
Though it covers the same time frame as Erway's “Not Eating in New York ” blog, this isn't a repurposing of her posts—rather, it's a memoir with recipes, a rapidly growing genre. The premise is simple: adding up the money's she spent on repeatedly eating out for lunch and ordering takeout for dinner, the 20-something Brooklynite decides she'll start preparing all her meals at home, and sticks with it for two years. (All that saved money comes in handy when her boyfriend breaks up with her and she has to find her own apartment, but then there's a new dilemma; as her mother points out: what do you do for dates when you can't go out for dinner?) Erway is up for just about any food-related adventure, whether it's making inroads into New York 's underground supper club scene, pulling discarded food out of trash bags, or testing the power of menudo (a Mexican stew) to cure hangovers. And the recipes—ranging from a simple asparagus salad to chipotle cornbread stuffing and a soy-sesame filet mignon with wasabi mashed potatoes—will have readers racing to their stoves.